We had been promising Charlotte a trip to Legoland for some time. She was so excited she almost burst on the way there with excitement.
Outside there were staff giving out sword balloons which keeps little ones entertained while you are standing in shock at the admission prices. 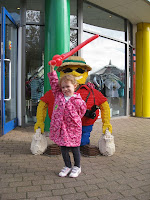 We headed for duplo land first via a couple of rides on the way, the puppet show at duplo land is always good to watch. Completely forgot that there is a water play area and we had forgotten costumes and towels, seems everyone else had forgotten this too.
Charlotte is just under that magic 1m height for the bigger rides so there were a few things we couldn't go on, but everything else she loved. We came off one ride to go rush straight onto another, and sometimes go on it twice. The new ride this year was Atlantis, an underwater adventure and it was excellent, but seemed to be over all to quickly. 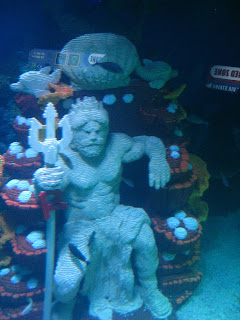 We love the parent rivalry at the fire academy, racing your fire engine to the burning house to put the fire out and then back again.
The best bit for Charlotte was getting her driving licence at the L-drivers school, this is a mini-version of the driving school for 3-5 year olds. She loved it and was so pleased with herself. 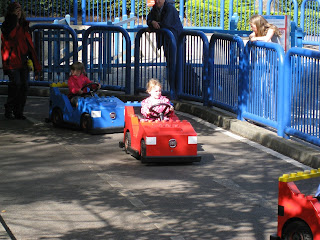 The bit we enjoyed as a family was the pirates of skeleton bay stunt show. Real goodie badie show with all the boos, hisses and hes behind you bits with some excellent stunts.
The mini-land I thought was starting to look a bit tired, as legoland opened in 1996 I'm assuming some if it is original so I'm not surprised. But some bits do get updated, Charlotte easily spotted Will and Kate on the balcony of Buckingham Place.
We took our own food, so can't comment on the quality of food or prices. Being out of season quite a few of the food places were closed down.
Everywhere is pushchair accessible, with bays to leave pushchairs if you are going on the ride. All the toilets were clean with nice low basins for the kids and large cubicles.
As I said earlier we did go out of season, on a week day so queues were almost non-existent. This was a real bonus. Even with not having to queue we only just managed to do everything in a day. Legoland have realised this and next year the Legoland Hotel is opening. We saw it being built and it looks great.
Charlotte enjoyed the day so much, and keeps on asking to go again. But the admission price is shocking, considering she is too little to go on some of the rides but still has to pay child price and now you have to pay to park. Being end of season things were looking tired and some bits weren't working on the fairy tale brook, but we all left with a big smile on our face and slept very well that night from all the walking.
Posted by The Strolling Mum at 15:47