Hi There. Guest Blogger "ReaditDaddy" checking in to moonlight on my wife's excellent blog. Bear with me, haven't quite got the hang of the controls yet - but I'm here to tell you all about "Dear Father Christmas". 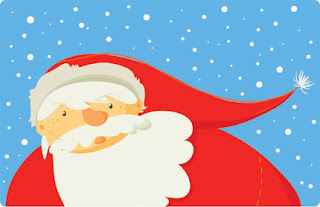 Any event hosted at the Burton Taylor room at the Oxford Playhouse is destined to be a cosy, intimate gathering and "Dear Father Christmas" - a children's play for 3-6 year olds, was no exception.

Telling the story of a mischievous Elf, her boss Mr TickTock, and the preparations for Santa's big night, "Dear Father Christmas" largely takes place in Santa's Post Room and with an effervescent cast of two (oh, and Father Christmas himself of course), the play was an interactive fun experience that pressed all the right buttons with Charlotte.

All the Elf wants to do is travel the world, see interesting sights and then come back to sort through Santa's post. Instead she's stuck in the post room but there are lots of willing new elves to help her sort the mail, tidy up and solve the mystery of the missing polar bear - Santa's oldest and dearest friend.

Adults are encouraged to take part too (they call us "giants" don't you know!), but the focus is on getting children involved - making hats and elf ears, constructing paper chains to cheer up Santa's christmas tree - and joining in with the songs and activities that happen throughout the play.

Even for a slightly curmudgeonly sort, the play was good fun and Charlotte absolutely loved every minute of it. I think her favourite bit was probably when the polar bear reappeared and crept quietly through the audience (only one child cried his head off at this bit).

It's not really suitable for older children (quite a few kept making quiet comments about the cast basically playing all the different characters) but the two main cast members were brilliant, and Father Christmas did very well for his first dramatic role :)

All in all a great time was had by all - though it did feel a bit of a cheat that paying extra to spend time with Father Christmas after the play didn't quite happen as expected (I think we were expecting to sit on Santa's knee and tell him Charlotte wanted Barbie Washing Hair and Daddy wanted A Lego Technics VW Camper - but it was rather crowded and a bit of a push and a shove instead).

Despite the request for parents not to take photos, one couple decided to continually take pictures through the latter half of the show - which was a bit annoying but all in all it was a perfect hour-long mix of song, dance, activities and fun that sets the scene for the festive period perfectly. Dear Father Christmas runs until 24 December at the Oxford Playhouse

Daddy's favourite bit - Alright, a tiny little crush on the elf. She was very cute.