We spent a really enjoyable day going round Portsmouth Historic Dockyard there really is a lot to see and do there. Not even the great British weather could ruin our day, and a bonus was under 7's go free.
Readitdaddy and I both last went when we were still at school, some years back, and all I remember of the day was HMS Victory. Was quite surprised to see how much more there is to see and do. Your entrance ticket includes HMS Victory, HMS Warrior, a harbour tour, Action Station, story of the Mary Rose (conservation work is currently ongoing on the Mary Rose so she's not on show) and a number of museums.

We started off at HMS Warrior, just by the entrance, to be greeted by a very cheery sailor who was on hand to explain things as we went around (and tell us about the ghosts!). Parts of the ship, like the washroom/laundry, even smelt like you had gone back in time. A leaflet is given to you to accompany your trip round, and also signs in each area to explain things. The history of the Warrior is very interesting, and her significance in Naval history. She is part wood, part iron, also sail and steam. 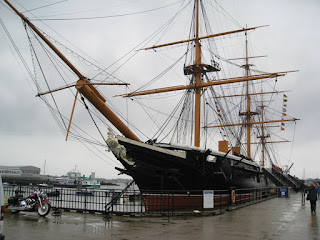 Next we took the 45min harbour tour to see all todays Naval ships upclose, this happened to include some famous ones such as HMS Dragon which was only launched last year, and HMS Illustrious which is the current aircraft carrier in service. This took us back to when we visited Fleet Air Arm museum where they had a mock-up aircraft carrier you could go round. We felt very tiny in our boat beside all the big warships. An audio tour was given on board and was very interesting. 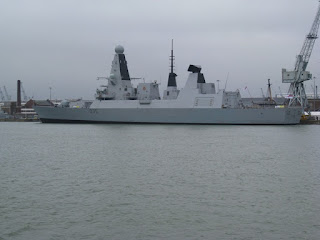 We had a lovely lunch in the Georgian Tearooms, and wondered through the most bizarre antiques storehouse. Then headed onto HMS Victory. The lack of information on HMS Victory made us feel like we missed a few things, lots of signs around explaining certain things (like the storage in the Grand Magazine) but the marker for where Nelson fell to his death we almost missed. There was no information given in the Admirals Cabin, nor in the leaflet, we over heard someone explaining that the outfit was the one Nelson died in. As I say though other areas gave a wealth of information (how they preserved Nelsons body in a barrel of brandy). The history and importance of the ship and the role it played is told well. 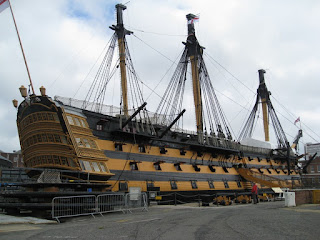 After going round the Victory and naval museums we finished the day off in Action Station, we were a little disappointed by this as a lot of the hands-on things were broken. Kids love to press buttons and turn handles but when it does nothing they soon get a bit fed up. The climbing wall looked great fun though and also the training circuit.
When asking Charlotte what the best bit of the day was she said everything, so that really must mean she enjoyed it all. There are a lot of steps to go up and down on the ships, and very steep ones so having a child who can easily navigate them is important. http://www.historicdockyard.co.uk/
Posted by The Strolling Mum at 22:06