When we brought Charlotte a Trunki (Penelope) for her birthday we were a bit unsure of how much it would get used. She's 4 years old so we were wondering if she was still in the right age group for a Trunki. Would her legs be too long for pulling around? Would we ever use it for sitting on? Would it just be in the back of the cupboard for ever?
Well 9 months later and its been used plenty. We brought it knowing we had some holidays coming up, and its first trip was to Lanzarote. Charlotte loved filling it with her toys and hiding Barbies' shoes in the secret pockets (which I thought would be too small for anything useful but kids find a use), we downloaded the activity packs from the Trunki website and packed that along with lots of colouring pencils.
At the airport she was happily pulling "Penelope" along, oblivious to the people shooting in each direction not wanting their ankles bashed by her mad weaving. As the airport filled up we decided her pulling it was not the best idea so it was on our shoulder the rest of the trip. 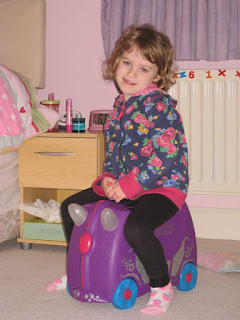 On-board the plane and Trunki easily slipped under the seat on board our Thomson flight and was great for toys and snacks to keep her entertained. Our only downside with the really limited space on-board short haul flights you have to be good at opening and closing well without everything tipping out, but the clips for the case could do with being the other way around. You need the teddy bear straps to be on the top but when you go to close it the closing clips trap in the side. Took a bit of mastering that one. 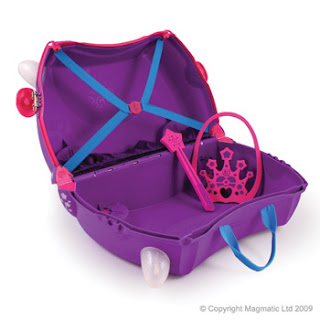 "Penelope" happily sat in our apartment all week being ridden around on and storing our weeks worth of toys and books and colouring bits. We did the trunki diary every day and also learnt a bit of Spanish thanks to the trunki passport downloads, excellent idea that.
On the way home "Penelope" really came into her own, we were the last bus for our fight arriving at the airport and stuck at the back of an hour long queue. But with wand in hand, tiara on head and a princess carriage to sit on the hour long queue went easier than you can imagine, and she didn't have to stand up when the queue shuffled ahead at a snails place. More a princess glide on "Penelope". We even got comments of how well behaved our daughter was! 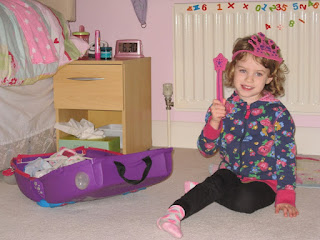 Since "Penelope's" first outing she's also made it to Disneyland Paris, a few trips to Cornwall and plenty of overnight stays at grandparents. Its big enough to fit clothes in for a 2 nights overnight stay, or enough small toys, books and teddy for a longer trip. Its amazing what we can squeeze in.
Was she a good buy, overall yes. We may not use her for the pulling along but she is great for sitting on in airports, wonderful for kids to get involved in the packing (if it doesn't fit in "Penelope" it doesn't get taken) and the designs are really appealing. I think we will still get a few more years use out of "Penelope" before she wants something a bit more grown up.