The weather is too wet at the moment for a lot of our walks, so here is a post about how we used to "wear" Charlotte when she was little.
Whilst pregnant I was looking into other ways of wearing my baby other than structured baby carriers, having read about how they don't offer enough hip support (I don't know if this argument is still ongoing but in 2008 it was). There was also a programme on tv at the time regarding different parenting types and one of the mums had a moby wrap. 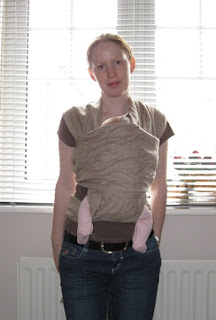 I did lots of reading up on moby wraps and also how easy they are to make from websites like the babywearer, headed to the shops with my mum for a very long piece of material. My mum hemmed the edges and also did a join down the middle (some sites advise against this, but we triple stitched and wouldn't wear when she got "really" heavy). I started wearing Charlotte from a month old, just round the house and then trips to the shops. A few months later we were often putting her in the wrap instead of the pushchair as it was so much easier. She settled really easily and the wrap is so versatile. A few different type of carries for front holds, and also back holds when she got that big bigger. I never did master a hip hold though. 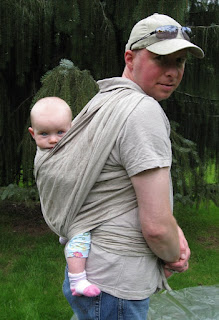 When she was 9 months I decided to make a mei-tai type carrier. I mocked up a little prototype which Charlotte then carried her teddies in, and then went on to do mine. 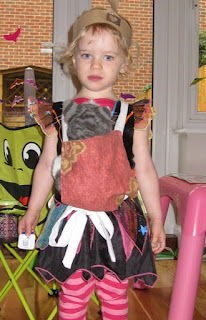 Again the babywearer website was great for ideas and I did a slight modification of the "Man Tai". Instructions were really simple to follow and the results were great. 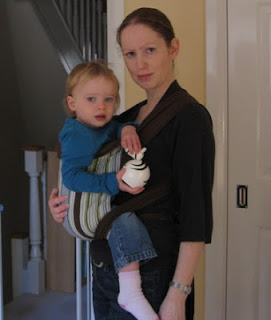 We both used it until Charlotte was 3 years old, first for front carries and then back carries when she was that much larger. If you go for a long day out it rolls up in the bottom of a bag and when they are tired in a few mins you can have them on your back falling asleep. No dragging that pushchair around when its not going to get used.

And here she is at almost 5 years old still fitting in the mei tai, little bit heavy for a long walk but she thought it great fun to be carried again. 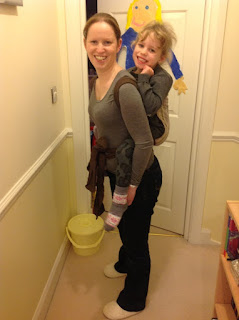 Posted by The Strolling Mum at 22:29 No comments: