We decided to do a birthday party with a difference, we avoided having to organise party games in a hall, tantrums over not winning games and this new thing of sweets in every layer of pass the parcel. We decided on an extra cold February day to get the kids outside exploring. We still passed on the organising bit and left this to the excellent Corinne at Earth Trust. 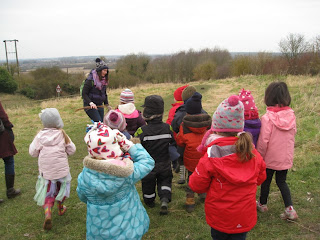 So with a dusting of snow fall on the ground we all met up at the earth trust offices, all of us decked out in at least 4 layers and thermals and the kids buzzing with anticipation of what was going to happen. I think the parents were interested with a bit of dread that it was "so cold / I could do with a good cup of coffee in the nearest cosy cafe". But soon enough with kids running ahead we were at the base of Wittenham Clumps. The kids were armed with a little plastic pot each to fill with things they could find. Corinne gave them instructions to find different colours and textures, and even on a freezing cold February day once you looked closely you did spot different things. Then they added a touch of snow for fairy dust.
Some magic water was added to their pots then they made a wish and turned them out, so the wish would come true. 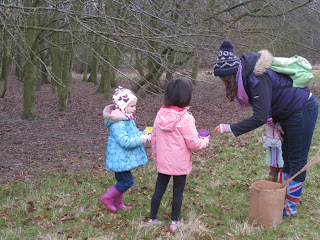 Soon enough we were into the woods and finding twigs and leaves, and making magic wands with a face on the end and giving the wands magic powers. 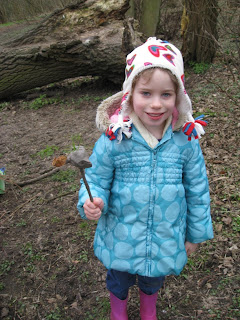 The children went looking for fairy signs and put string on branches as signs for the fairies. We then looked for fairy houses in the trees and then collecting sticks and leaves to make fairy houses. 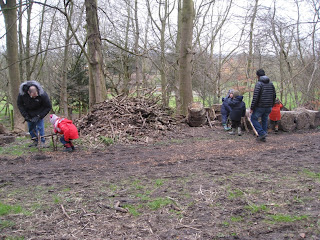 A couple of games of hide and seek in the woods to keep the kids moving and warm and we headed back to the party room. Muddy boots left outside and lunch boxes of food were waiting inside for the children (and cups of much needed warm coffee and tea for the adults).


All the children went home having had a great time, it was the talk of the playground for most of the week. I've been informed by most parents that the magic wand has pride of place in the garden and there are fairies hiding at the end of the garden. This was a fairy party, but boys and girls were invited and the boys loved it just as much as the girls. It really was inclusive. As said by one little boy on his way home "I didn't think I would enjoy a fairy party but it was great fun". There are other themes of parties and they vary depending on the age group and time of year.

The food, coffee and tea supplies, cake, balloons and party bags were provided by us, but surprisingly took minimal effort, no prizes had to be thought of or 50 layers of wrapping for pass the parcel.

What are we going to do next birthday, probably another Earth Trust party as I really don't think it could be topped as an excellent idea that gets kids exploring. Please also read my recent post about why its so important to get children outside.
Posted by The Strolling Mum at 10:00 2 comments: