We weren't planning on going to Wookey Hole, the website and leaflets made it look really tacky, I know its for the kids but sometimes it needs to appeal to the adults too as they are the ones spending the money. So we headed off to Cheddar Gorge to be greeted by the stupidest car park pay system so we about turned and headed to Wookey and we were so pleased we did.
It was out of season so very quiet, I imagine during summer it's a lot busier. We also went on a week day, if you go during the weekend during peak season you get to meet the Wookey Witch (as seen on x-factor the website says). It was quite a long walk from the pay point at the bottom to the entrance of the cave. Its a guided tour round and we got there just in time, otherwise would have had a 20min wait. The guide was really informative and gave an excellent tour. 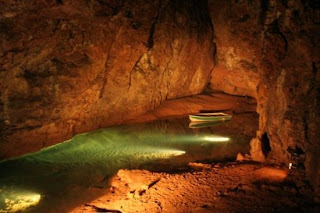 The history and geology was really fascinating, even to the younger ones in the group pointing out the shapes of stones and how they are formed. The cave-aged cheese was really whiffy, strong stuff. You can taste, and buy some later in the shop.
After the tour you can wonder around a fairy garden and the valley of the dinosaurs, Charlotte was rather scared of the dinosaurs... and the HUGE King Kong. 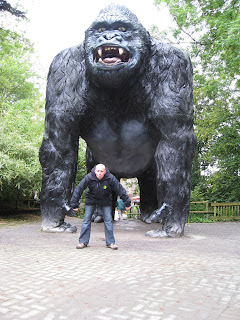 There was an interesting paper making demonstration that over 5's could have a go at making, if they are too young your tour guide will assist in helping make some paper.
There were so many indoor things too which makes it a real all weather attraction, to name just a few things were a history of the cave museum, quite a few circus themed things and some excellent play areas.
We did eat in the restaurant but not that impressed by the food, there are plenty of pack lunch areas though.
Due to how many steps were in the caves pushchairs have to be folded down, the guide did assist in taking someones pushchair through a short cut so they didn't have to carry it.
We had a really excellent day, but it's very expensive we had to pay the same rate as those who visit during the summer holidays even though some things weren't running (wookey witch for example). We loved the look of the Wookey witch hotel complete with witches hat!!! 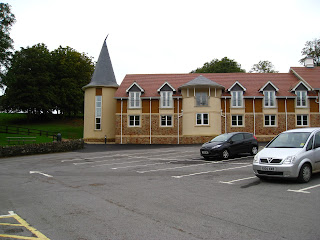 More information here http://www.wookey.co.uk/
Posted by The Strolling Mum at 21:17