After our successful trip to Buckingham Palace we thought we would visit Windsor Castle. The first Saturday of each month they have children's activities, and also in December they have 2 state rooms set up with a Christmas theme display. 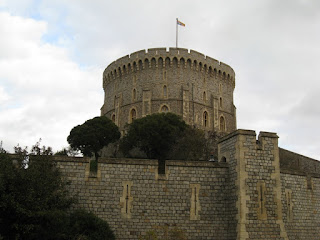 On approach we noticed the Royal Standard was flying, we tried to do Queen and corgi spotting. We were told by some very helpful guides that a good place to spot her was from the Crimson Drawing Room as this overlooks the queens garden but alas she wasn't there.

We collected our excellent audio guides, with a children's version for Charlotte to listen to, to take us round. The audio guides are really good with so much information, Charlotte really does listen to it as she asks us to find the things they are talking about. After passing the jubilee gardens and up to Edward IV tower where you get a wonderful view across the Upper Ward and quadrangle, this is where important visitors are greeted. 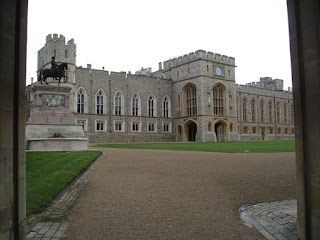 Heading towards the Henry III tower was the moat education room where Charlotte got to do some colouring and look at some pictures. 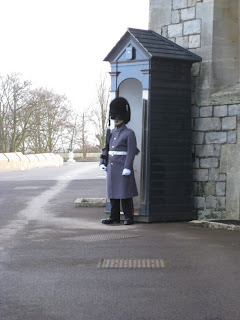 We headed to the State Apartments, and passed Queen Mary's Dolls house, which was fascinating with so much detail to it, also on display were dolls dresses which were so wonderfully made. The state rooms were quite different to Buckingham Palace, being a castle there was a lot of armour and swords on display. The fire in 1992 was covered quite a bit as you walk through the rooms that were destroyed. The difference in the old and new is obvious but the rooms are still to such high stadard and in keeping with the rest of the castle. The room containing all the Shields for the Knights of the Royal Garter was stunning.
We had lunch in the Undercroft Cafe, it was a little pricey but the food was wonderful. 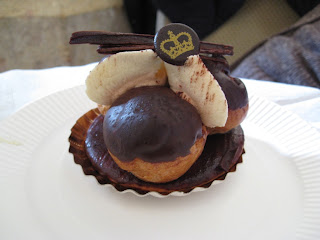 We then went to St. Georges Chapel, where we got to sit in the inner chapel and look again at the shields and crowns for each of the Knights of the Royal Garter. We noticed coffins and shrines for most of the previous kings and queens, the most opulent was for Queen Victoria's children and grandchildren.
We had a really good few hours going round Windsor Castle, and even readitdaddy left having enjoyed it more than he expected.
Posted by The Strolling Mum at 17:16